If only we can get the grandma zombies to protect our elders from probate and locked down nursing homes?

Any film student want to write a plot for that one?

Zombie grandmas:  How to make the most of getting old
By Jane Stillwater  http://jpstillwater.blogspot.com/2015/04/zombie-grandmas-how-to-make-most-of.html
About three years ago, I made the big mistake of looking too closely into my bathroom mirror.  Yuck!  All I could see was wrinkles and gray hair.  But wait — I was never supposed to have actually gotten this old.  This was never supposed to have happened!  But it did — at least to my body if not my mind.
“So,” I said to myself, “what the freak can I do with OLD?”  I know!  I’ll become an actor!  And so I did. 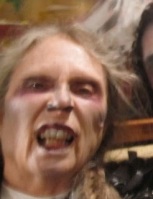 Fortunately, there are several film schools in my city where student directors are always looking for talent to use in their films — especially talent that will work for free just to have an excuse to get out of the house.  And so suddenly I found myself in big demand.  I mean really.  How many little old ladies do you know who are willing to throw themselves into an acting career?  Not all that many.  So I seemed to have pretty much cornered the market — because there’s really not all that much competition.

At auditions even for non-paying student-film roles, believe it or not, there are usually scores of child actors, ingenues and even beautiful leading ladies, all dying to try out for a part.  But there just aren’t that many little old ladies out there to compete with, thank you very much.
And so now I have found one very successful way of taking advantage of the age factor that is currently barreling down on all of us like a steam-roller with no way to avoid.  And there are also bound to be other ways to make the most of our “senior” years too (such as finally realizing that “war” is a racket, an obscenity and a con-game, something that most people apparently have not reached the age of having finally acquired enough wisdom to realize at all — and then working our suddenly-senior hearts out to stop all “war” from ever happening again).
In the past three years, I have been in over one hundred student films, playing all kinds of grandma roles — sweet loving grandmas, for instance.  And society grandmas, dying cancer patient grandmas, cowgirl grandmas, evil grandmas, war-correspondent grandmas, psychotic grandmas, ghostly grandmas, college-professor grandmas and corpse grandmas, as well as grandmas who are doctors, lawyers and judges.
But my favorite grandma role of all time is playing a grandma zombie!
PS:  Let’s face it.  Getting old sucks eggs.  Nothing fun at all about having creaky joints, being mostly ignored for not being sexy enough, having trouble sleeping, facing possible dementia, living on cat food, facing multiple surgeries, having one’s teeth fall out, etc.  So we gotta always be constantly looking for ways to make growing older more fun on some level or another.
Turning into a grumpy frump, believing the lies and hatred being constantly broadcast on Fox News, and/or just plain giving up on life are definitely three ways not to have fun!
PPS:  “Some will rob you with a shotgun, some with a fountain pen.”  Elders these days are being targeted as victims by bad guys in several different ways.  Street thugs may mug elders for their pocket money — but probate thugs can mug our elders for their life savings as well.  https://marygsykes.com/2015/03/27/in-chicago-what-does-a-nursing-home-do-when-its-understaffed-break-out-the-chemical-restraints/
In Chicago, for instance, probate sharks seek out rich widows, get them declared incompetent, throw them into stark “assisted care” institutions where they are medicated into submission, clean out their safe deposit boxes and then throw them out into the streets to die when there is no money left.  “Target, isolate, medicate, drain and eliminate” is their mantra.  https://marygsykes.com/about/
Or else your sleazy relatives rob your rightful heirs of their rightful share of your estate after you’re gone:  http://jpstillwater.blogspot.com/2015/04/probating-family-feud-authors-note-this.html
But nobody messes with zombie grandmas!

2 thoughts on “From Jane Stillwater–No one messes with Grandma Zombies!”