From another website, here is the complaint (probably one of many) that got a bunch of judge/lawyer whitie tighties in a bunch and got her jailed and disbarred with a great big rubber stamp

Dear Chief Justice Labarga and Judge Pariente, Judge Lewis, Judge Quince, Judge Canady, Judge Polston and Judge Perry:
As a Florida Bar member, I am mandated under Rule 4-8.3 to report misconduct by attorneys and judges. Under the Jud icial Canons 3, Judges have the same duty and obligation. 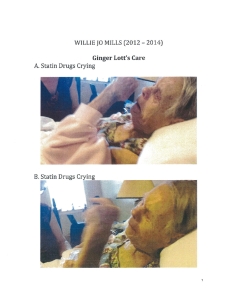 With this letter, upon information and bel ief, I am summarizing the vicious retal iation to which 1, as a Member of the Florida Bar have been subjected as a resu lt of my acting as a whistleblower and exposing the rampant corruption in the probate I guardianship enterprise in the court of Michael Genden and the horrific abuse, terror and torture to which he and the highly corrupt “guard ian” enterprise he has installed to humanly owned my mother. 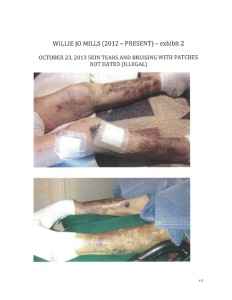 The attached letter documents the crimes perpetrated against my mother by Michael Genden, ajudge in the probate comt in the 1 1•h Circuit and member of the Florida Bar and Roy Lustig, an apparent criminal disguised as an attorney and other Judges and attorneys who are Members of the Florida Bar who hold my mother hostage and subject her to unimaginable cruelty and crimes against humanity to stop me and retaliate against my mother and against me, a mandated reporter of wrongdoing as an attorney and a member of the Florida Bar from reporting and exposing the heinous criminal activities and racketeering ring engaged in human trafficking, money laundering, wire and mail fraud, extorting the assets and personal property of elderly adults who are being preyed upon by this criminal enterprise that operates out of the courthouse under the guise of “guardianship.”

Media from all over the country are exposing this criminal guardian racket including Susannah Frame, Chief Investigative Reporter at King TV and Janet Christensen Obrien who flew in from Seattle to make a prominent film that received a prestigious IMDb ranking documenting my mother’s story and others.

I am a whistleblower to the criminal and racketeer activity by Michael Genden, Roy Lustig and other judges and attorneys who are members of the Florida Bar. Michael Genden is an accomplice to repeated attempts to pre­meditatively murder my mother by drugging her into a stupor with chemical restraints that carry black box warnings, isolating her by illegal court “edicts” denying me my right to the court and covering u p the fraud, perjury, extortion and felony crimes of Roy Lustig, Jacqueline Hertz, Blaire Lapides and Alan Stone, each who are guilty of felony crimes as set forth in the attached letter.

This will seek whistleblower protection for me and on behalf of my mother and her emergency admission to the hospital as she is in grave danger. I fear for my safety and the safety and life of my mother.

I look forward to your urgent response.

And if you think that Illinois is any better, all of lawyers Kenneth Ditkowsky and Lanre and myself were suspended for long periods (3 to 4 years) for reporting corruption to the Judicial Inquiry Board of Illinois and the Illinois ARDC wherein they shot the messenger!  That’s right, in Illinois, a lawyer cannot complain about corruption, run a corruption blog or they risk facing a trial where (no kidding) and ARDC lawyer named Melissa Smart will claim that a corruption blog is like yelling “fire” in a crowded theater.

I am not making this stuff up.

I submit it is only possible if the theater is filled with crooked cops, judges and lawyers, but apparently Melissa Smart is saying that’s what we have a plethora of in Illinois.

1 thought on “Activist Alert–Lawyer Activist Barbara Stone complains about judges and lawyers abusing the elderly in guardianship and get arrested and disbarred.”