While this article was first published in 2014, I do not see the use of the dangerous drugs ending.  Alan Frake was such a victim and you can contact his son Gary and other family members for confirmation.  Alan Frake, prior to guardianship, was strong healthy and could carry on a conversation.  After he was guardianized and placed against his will into a locked down facility, he became a withering drooling mess.  The judge did not care (Quinn) and neither did the other attorneys (Peck and Rhodes).

Read on for more information and speak out against this horrific abuse against the elderly and their families. 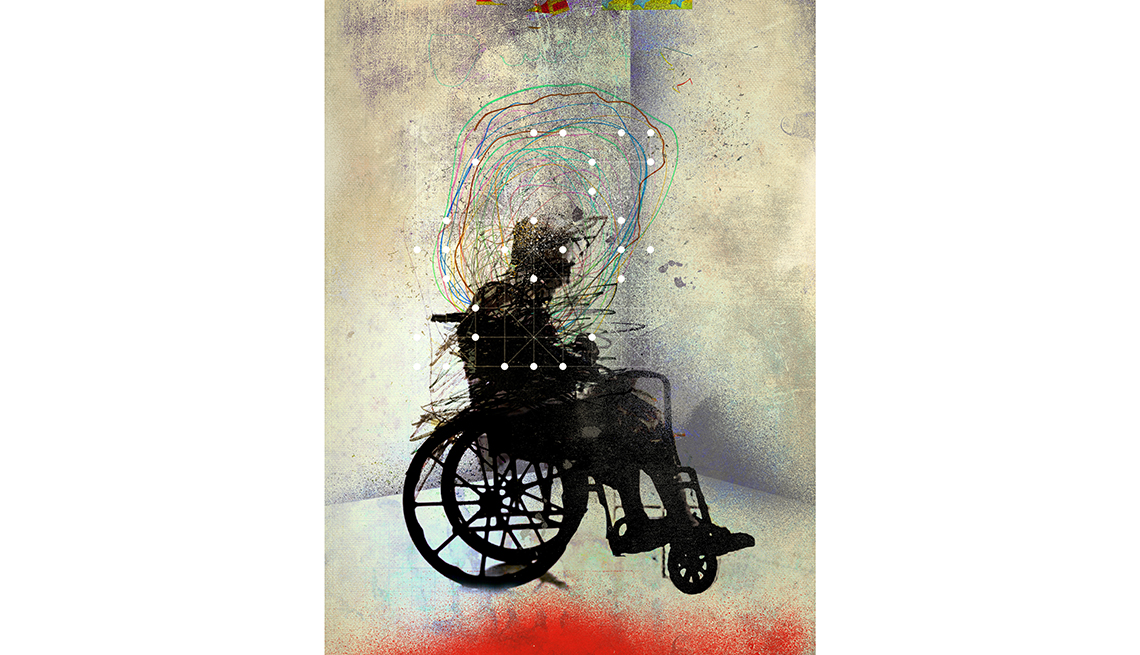 Antipsychotics may trigger serious side effects in patients with Alzheimer’s disease.

En español l When Patricia Thomas, 79, went into a Ventura, Calif., nursing home with a broken pelvis, the only prescriptions she used were for blood pressure and cholesterol, and an inhaler for her pulmonary disease. By the time she was discharged 18 days later, she “wasn’t my mother anymore,” says Kathi Levine, 57, of Carpinteria, Calif. “She was withdrawn, slumped in a wheelchair with her head down, chewing on her hand, her speech garbled.” Within weeks, she was dead.

Thomas, a former executive assistant, had been given so many heavy-duty medications, including illegally administered antipsychotics, by the Ventura Convalescent Hospital in November of 2010 that she could no longer function. If one drug caused sleeplessness and anxiety, she was given a different medication to counteract those side effects. If yet another drug induced agitation or the urge to constantly move, she was medicated again for that.

“Yes, my mom had Alzheimer’s, but she wasn’t out of it when she went into the nursing home. She could dress and feed herself, walk on her own. You could have a conversation with her,” says Levine. “My mother went into Ventura for physical therapy. Instead, she was drugged up to make her submissive. I believe that my mother died because profit and greed were more important than people.”

A Ventura County Superior Court judge agreed that Levine had a legitimate complaint against the nursing home. In May, attorneys from the law firm Johnson Moore in Thousand Oaks, Calif., joined by lawyers from AARP Foundation, agreed to a settlement in an unprecedented class-action suit against the facility for using powerful and dangerous drugs without the informed consent of residents or family members. “It is the first case of its kind in the country, and hopefully we can replicate this nationwide,” says attorney Kelly Bagby, senior counsel for AARP Foundation Litigation.

Tragically, what happened to Patricia Thomas is not an isolated incident. According to Charlene Harrington, professor of nursing and sociology at the University of California, San Francisco, as many as 1 in 5 patients in the nation’s 15,500 nursing homes are given antipsychotic drugs that are not only unnecessary, but also extremely dangerous for older patients. The problem, experts say, stems from inadequate training and chronic understaffing, as well as an aggressive push by pharmaceutical companies to market their products.

“The misuse of antipsychotic drugs as chemical restraints is one of the most common and long-standing, but preventable, practices causing serious harm to nursing home residents today,” says Toby Edelman, an attorney at the Center for Medicare Advocacy in Washington, D.C. “When nursing facilities divert funds from the care of residents to corporate overhead and profits, the human toll is enormous.”

Last November, in what the U.S. Department of Justice called “one of the largest health care fraud settlements in U.S. history,” Johnson & Johnson and its subsidiaries were fined more than $2.2 billion to resolve criminal and civil charges because of their aggressive marketing of drugs, including antipsychotics, to nursing homes, when they knew the drugs had not been approved by the U.S. Food and Drug Administration (FDA) as safe and effective for a general elderly population. The corporation also allegedly paid kickbacks to physicians, as well as to Omnicare, the nation’s largest long-term-care pharmacy provider. Omnicare pharmacists were recommending Johnson & Johnson’s drugs, including the antipsychotic Risperdal, for use by nursing home residents.

Back in 2009, Eli Lilly did the same thing with its antipsychotic Zyprexa, marketing to older people in nursing homes and assisted living facilities, federal prosecutors charged. In a settlement, the company agreed to pay $1.4 billion. “This case should serve as still another warning to all those who break the law in order to improve their profits,” Patrick Doyle, special agent in charge of the Office of Inspector General for the U.S. Department of Health and Human Services in Philadelphia, said at the time.

A report released in March by the inspector general of Health and Human Services charged that one-third of Medicare patients in nursing homes suffered harm, much of which was preventable. “Too many nursing homes fail to comply with federal regulations designed to prevent overmedication, giving patients antipsychotic drugs in ways that violate federal standards for unnecessary drug use,” Inspector General Daniel Levinson said. “Government, taxpayers, nursing home residents, as well as their families and caregivers, should be outraged — and seek solutions.”

Antipsychotic drugs are intended for people with severe mental illness, such as patients with schizophrenia or bipolar disorder. As such, they carry the FDA’s black-box warning that they are not intended for frail older people or patients with Alzheimer’s or dementia. In those populations, these drugs can trigger agitation, anxiety, confusion, disorientation and even death. “They can dull a patient’s memory, sap their personalities and crush their spirits,” according to a report from the California Advocates for Nursing Home Reform.

Kept in the dark

What’s more, the law requires “informed consent” by a patient or, if that is no longer possible, by his or her family before such drugs are administered. Yet advocates say that, all too frequently, this doesn’t happen. Levine, for example, says she didn’t know about all her mother’s medications until she transferred her mom to another facility. “When I saw the list of what she’d been given, I freaked out. I was upset and angry, in tears,” she recalls.

How can such things happen? One explanation is that many facilities don’t have enough properly trained staff: Most of the patient care in nursing homes falls to certified nursing assistants (CNAs) who need as little as 75 hours of on-the-job training to get certified. “Yet if you want a license to be a hairdresser, you need 1,500 hours of training,” Harrington points out.

What’s more, CNAs are paid low wages so many of them work long hours. “They are totally exhausted, with extremely heavy workloads,” she says. That leads to high employee turnover and caregivers who don’t know their patients well enough to recognize their needs.

Compounding the problem, many nursing home patients require a high level of care. Some are incontinent, and an estimated 60 to 70 percent have some form of dementia. There should be one CNA for every seven patients, but in some cases, the ratio is 1 to 15 — or even more, Harrington says. There also tend to be too few physicians actually present in nursing homes. “These facilities are highly medicalized, but doctors are rarely there,” says Tony Chicotel, staff attorney for California Advocates for Nursing Home Reform. He says that because of their low rate of reimbursement from Medicare, nursing homes are too often seen as a place where few top doctors practice.

The result of all this can be so-called behavior problems among patients — which is the explanation nursing homes cite for giving patients unnecessary antipsychotic drugs, according to the U.S. Centers for Medicare and Medicaid Services (CMS). And pharmaceutical companies have been aggressively marketing their products as an easy and effective way to control these issues.

“There was a push by drug manufacturers, claiming these medications work for seniors when they knew, in fact, that it doubled their risk of death,” Chicotel says.

CMS, which oversees the nursing homes that receive funding from federal programs, says it has been working to correct deficiencies in nursing facilities, including the inappropriate use of medications. The agency achieved the goal of reducing the inappropriate use of antipsychotic drugs by 15 percent over a recent two-year period, and hopes to get to a 30 percent reduction in the next few years, according to spokesman Thomas Hamilton. But Edelman points out that initial goal was reached more than a year late, and some 300,000 patients are still receiving the drugs inappropriately. Hamilton acknowledges that more needs to be done, but lack of funding from Congress is making even the most preliminary work difficult.

Fortunately, a growing number of nursing homes have begun to look for more effective — and more humane — ways to care for patients. Better training for caregivers is key: According to Cheryl Phillips, M.D., a geriatrician at LeadingAge, an organization representing nonprofit services for older people, nursing home staff can be trained to deal with behavior issues thoughtfully and creatively, without resorting to drugs.

She cites an example of a male patient who was spending his days in a noisy nursing home activity room. One day, he grew more and more agitated and tripped an aide with his cane. To calm him down, the staff took him to his private quarters. Over the following days, his behavior in the activity room became increasingly aggressive; he began randomly hitting caregivers and fellow patients. Each time, he was taken away to spend time in his room.

“The staff initially thought he had become violent and needed an antipsychotic,” Phillips recalls. “But they ultimately realized that the cacophony in the activity room was stressing him out. Caregivers inadvertently rewarded him by giving him quiet time in his room, which is what he wanted. When they did it repetitively, they reinforced his aggressive behavior.” Once the staff discussed the problem and began finding peaceful activities for the patient, the problem was solved — no drugs needed.

Another success story is the Beatitudes facility in Phoenix, which dramatically changed its way of handling patients with dementia based on Tom Kitwood’s book Dementia Care Reconsidered: The Person Comes First. “What happens here is not for our systems, our convenience, but for the people we care for,” says Tena Alonzo, the director of education and research at Beatitudes. “People with dementia have disturbances in their sleep/wake cycle, so we let them be comfortable and decide when they want to sleep or eat, or not. Or how they want to spend their time,” she says. As a result, patients stop resisting care, and the facility runs more smoothly.

The Beatitudes’ philosophy is now being taught to a growing number of nursing homes around the country. “We’ve created a softer, gentler approach, acknowledging that we are not in charge of a person’s life — they are. In allowing them to retain their dignity, and adopt a comfort level of care, we’ve had better outcomes,” says Alonzo. That paradigm shift has not increased operating expenses, or required a higher staff-to-resident ratio. “We discovered that better care was better business,” Alonzo says.

For Kathi Levine and her mother, these encouraging developments are coming too late. “I want our lawsuits to impact nursing homes all over the country,” Levine says. “We need to protect our family members. They don’t have a voice, they can’t speak for themselves. So we need to speak out for them and help other people know what to look for. I want to make sure that what happened to my family doesn’t happen to anyone else.”

Jan Goodwin is an award-winning author and investigative journalist for national publications.